Marvel's Mightiest Women get their own explosive series! In a secluded corner of Battleworld, the utopian island of Arcadia is fiercely protected by a team of Avengers the likes of which has only ever been glimpsed before. Fighting to protect the small sliver of their world that's left, the Amazing A-Force stands ready to take on all threats! When monsters appear on Arcadia, She-Hulk and A-Force set out to discover the source. But when they stumble upon a far-reaching conspiracy, She-Hulk is set up to violate Battleworld's most sacred rule. Now, A-Force must face the planet's protectors: The Thor Corps! A traitor in A-Force's ranks is revealed, and she won't rest until their island is razed. As Battleworld's horrors bear down on Arcadia, what sacrifices will the members of A-Force make to save their home — and each other?
Voir plus Voir moins 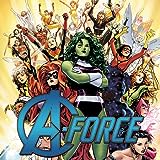 A-Force (2015)
Marvel’s Mightiest Women finally get their own explosive series! In a secluded corner of the Battleworld, an island nation is fiercely protected by a team of Avengers the likes of which has only ever been glimpsed before. Fighting to protect the small sliver of their world that’s left, the Amazing A-Force stands shoulder-to-shoulder, ready to take on the horde!

A-Force (2016)
A-Force, Assemble! From the ashes of Battleworld, Marvel’s newest hero Singularity has risen and entered the Marvel Universe. But she didn’t make the journey alone. To combat the most fearsome threats from across the multiverse, Singularity will summon the world’s mightiest team of Avengers to her side: She-Hulk. Captain Marvel. Dazzler. Medusa. Nico Minoru. Together, they are A FORCE to be
Infinity Gauntlet (2015)
Think your life is hard? Anwen Bakian’s family lives in a post-apocalyptic wasteland, scrounging for food and avoiding giant bugs intent on eating them. Mom left years ago to join the Nova force and never came back. So it’s just Anwen, her dad, her sister and her grandpa against the huge insects. That is, until she finds a mysterious stone that may or may not hold incredible cosmic power.

Hail Hydra (2015)
Peace through Strength! Honor through Obedience! Continuance through Conformity! Hail Hydra! Immortal Hydra! We shall never be destroyed! Cut off one limb, and two shall take its place! We serve none but the Master—as the world shall soon serve us! It is a beautiful Utopia that Hydra has created. But when a lone figure from outside the Regime appears, could his very presence be enough to bring t

Armor Wars (2015)
A shadow falls over an armored Utopia! Technopolis: Amazing Domain of science and wonder created by rival genius brothers Tony and Arno Stark. A utopia except...a unique disease forces everyone to wear armor to live and breathe! In this armored land a hero is murdered and the killer’s identity is a mystery Baron Tony Stark must solve. But in doing so, will Technopolis be forced into a civil war?