In the wake of the Infinity event, Captain America and Iron Man plan for the next version of the Avengers. But they soon discover that a runaway planet is on a collision course with Earth! Can a visitor from the future help save the day? We've been good up till now, but - this issue, an Avenger dies! Then: it worked for the X-Men. Would we be so crass as to do it again? Yes, yes we would! It's a blast from the past as Marvel introduces the All-New Avengers! But as the Science War overtakes the world(s), what is the secret behind this time-tossed team? When the answers are revealed, you'll wish they remained hidden! The collision of the Avengers and the New Avengers is imminent!
Voir plus Voir moins 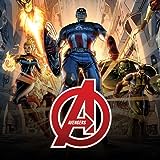 Avengers (2012-2015)
Marvel Now! adds new faces to Earth's mightiest team of superheroes! The Avengers expand their roster and sphere of influence to a global -- and even interplanetary -- level!

New Avengers (2013-2015)
To prevent a collision of universes, the Illuminati must assemble NOW! Led by the Black Panther, the most powerful and brilliant team in the Marvel Universe is up against an infinite legion of parallel realities!

Avengers: Time Runs Out
Collects Avengers (2012) #35-44 And New Avengers (2013) #24-33. For Earth's Mightiest Heroes and the Illuminati, it's all been building to this. One by one, the realities of the multiverse have collided and been destroyed, leaving the Marvel Universe as one of the last dimensions standing. Now, Jonathan Hickman's cataclysmic saga jumps forward eight months to the day of the Final Incursion —
Infinity
Prepare yourselves for the greatest battle for survival ever waged in the Marvel Universe as Marvel marches towards Infinity! The most dangerous threat in the Marvel Universe is back -- Thanos!
Avengers (2010-2012)
Kang The Conqueror has come from the future! Now, The Avengers must assemble to prevent a catastrophic threat from tearing apart the timestream. But who will answer the call?