Captain America gets the critically acclaimed Marvel Knights treatment! In the aftermath of 9/11, Captain America - already a man out of time - must adjust once again to a terrifying new global landscape. From the ruins of the World Trade Center to the horrors of a small town rocked by terrorism, the star-spangled super-soldier is forced to consider what it means to be the Sentinel of Liberty in an age of incomprehensible new threats. Meanwhile, the man named Redpath has his own American dream, and he orders his Extremists to cleanse the country by force. Only a true patriot, the living embodiment of the United States, can stop them. But when Captain America uncovers new truths about his decades trapped in the ice, the scale of the conspiracy may bring him to his knees!
Voir plus Voir moins 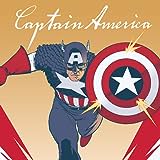 Captain America (1998-2002)
Steve Rogers is Captain America. And in this new age, it's up to him and his fellow Avengers to take down all threats, from Hydra to the Skrulls.
Iron Man (1998-2004)
It's Thor vs Iron Man! The Thunder God vs the Armored Avenger! Will Captain America choose a side? And what part does Dr. Doom play in it all?
Thor (1998-2004)
Standoff Part 1 (of 3) In war-torn Slovakia, a group of troubled citizens pray to the Thunder God for help and he provides it in the form of a divine task force. The Pentagon doesn't take too kindly to this and sends Iron Man to stop the Odinson!
Captain America & the Falcon
TWO AMERICAS PART 1 He has been his mentor, his leader and his friend. Now, Captain America takes on a new role in the Falcon's life: pursuer! Sam Wilson has gone rogue and S.H.I.E.L.D. has given Cap just 24 hours to bring him in!