Castle Waiting is the story of an isolated, abandoned castle, and the eccentric inhabitants who bring it back to life. A fable for modern times, it is a fairy tale that's not about rescuing the princess, saving the kingdom, or fighting the ultimate war between Good and Evil -- but about being a hero in your own home. The opening chapter tells the origin of the castle itself, which is abandoned by its princess in a comic twist on "Sleeping Beauty" when she rides off into the sunset with her Prince Charming. The castle becomes a refuge for misfits, outcasts, and others seeking sanctuary, playing host to a lively and colorful cast of characters that inhabits the subsequent stories, including a talking anthropomorphic horse, a mysteriously pregnant Lady on the run, and a bearded nun. Linda Medley lavishly illustrates Castle Waiting in a classic visual style reminiscent of Arthur Rackham and William Heath Robinson. Blending elements from a variety of sources -- fairy tales, folklore, nursery rhymes -- Medley tells the story of the everyday lives of fantastic characters with humor, intelligence, and insight into human nature. Castle Waiting can be read on multiple levels and can be enjoyed by readers of all ages, especially young girls.

Jim
Frank is, as everyone knows, Jim Woodring's bestselling cartoon character. Jim, on the other hand, is Woodring's cartoon alter ego, the fictional doppelganger who has for 30 years inhabited Woodring's alternate universe where shifting, phantasmagoric landscapes, abrupt, hallucinatory visual revelations, and unexpected eruptions of uninhibited verbal self-flagellation are common- place. Jim is a mi
Betsy and Me
Having mastered comic books and gag cartoons, in 1958 Jack Cole set his sights on the cartoonist's pot of gold—a syndicated newspaper strip. He hit the bull's-eye with Betsy and Me, a breezy domestic farce focusing on a middle-class urban couple and their smart-aleck genius son. Betsy and Me was an instant success and newpapers were lining up to buy it. Then, with only two-and-a-half month's wor
Dungeon Quest
One day Millennium Boy decided to grab his hobo stick, his bandanna, and his Swiss Army knife, bid his mom goodbye, and head off on a quest. Joined by his best friend Steve (weapon: baseball bat; clothing: wife beater, cargo pants and sandals), the two sort out a few of the details their adventure. 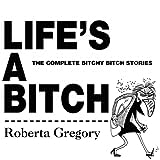 Life's A Bitch
Naughty Bits, the longest-running solo comic by a female alternative cartoonist, came to an end in 2004 after a 14-year, 40-issue run. Beloved for the expressive scrawl of Gregory's line and her take-no-prisoners satirical approach, it was particularly notable for introducing the world to Bitchy Bitch―a woman who is eternally, magnificently, and for the most part, quite justifiably pissed off at