Wally West is trapped out of time and space, lost in the recesses of dimensional bleed due to the Flashpoint caused by his mentor, Barry Allen. Drifting in this nothingness, only Wally—the man once known as Kid Flash and then the Flash—can see the mystery pervading the universe. Who has stolen 10 years?

Wally must now return to Earth and the loved ones who have always acted as his lightning rod, but no matter who he contacts, he slips further and further away, closer to nothingness.

The fate of the universe depends on Wally West's REBIRTH...

The story that began one of the most critically acclaimed launches of all time is here in DC UNIVERSE: REBIRTH DELUXE EDITION. Written by #1 New York Times best-selling author Geoff Johns (JUSTICE LEAGUE) with art from four of the industry's greatest talents in Ivan Reis (AQUAMAN), Gary Frank (BATMAN: EARTH ONE), Ethan Van Sciver (GREEN LANTERN: REBIRTH) and Phil Jimenez (INFINITE CRISIS), this new deluxe edition features a story with ramifications that will reverberate through the DC Universe for years to come!
Voir plus Voir moins 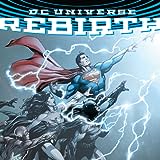 DC Universe: Rebirth (2016)
It all begins here. Do not skip to the last page. Do not let a friend or message board ruin this comic for you. The future (and past) of the DC Universe starts here. Don't say we didn't warn you! THEY SAID IT: "Rebirth is about focusing in on the core of the character and their respective universe," says writer and DC Entertainment Chief Creative Officer Geoff Johns. "It brings back what has be

Superman (2016-2018)
The Last Son of Krypton must decide whether to help his young son use his new and rapidly increasing abilities, or hide them from the world. THE CREATORS: The team supreme that brought fans the adventures of Damian Wayne in BATMAN AND ROBIN returns for the adventures of Superman and his offspring.
Justice League (2016-2018)
Spinning out of the events of DC UNIVERSE: REBIRTH #1, a new day dawns for Earth's greatest heroes as they welcome three new members to the team, including...Superman? Who is this strange visitor from a dead world—and can he be trusted? Batman and Wonder Woman aren't so sure.

Superman (2011-2016)
The adventures of Superman begin here, written by the legendary George Perez (CRISIS ON INFINITE EARTHS)! The Man of Steel flies into the new DC Universe with a new status quo but a continued quest for truth and justice!

Justice League (2011-2016)
Comics superstars Geoff Johns (GREEN LANTERN) and Jim Lee (BATMAN: HUSH) unite for the first time to tell the bold beginning of the DC Universe's premier super team! The dawn of the age of heroes has begun! Learn how the Justice League formed and what launched them as the greatest team in the DCU!