One of Vertigo’s longest-running series comes to its stunning conclusion.

After six years, Matty Roth's story and the Second American Civil War comes to an end. As the war enters its final weeks, Matty is given an unbelievable second chance, a golden opportunity to report once again from the DMZ-not as a network lackey but as an unbiased observer for the court of world opinion, to ensure both sides stay honest.

He is given total access, total freedom, and is determined to do right by the city where he once failed miserably.

Brian Wood and artist Riccardo Burchielli present their final chapter and remove any doubt that DMZ is, at its core, a love letter to New York City. DMZ: THE DELUXE EDITION BOOK FIVE collects issues #60-72.
Voir plus Voir moins 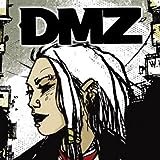 Northlanders
Religious conflict. Technological revolution. Fear of the end of the world. Sound familiar? It should. But it's not the world of today, it's the world of Europe, circa 1000 AD. The world of the Viking-based series NORTHLANDERS by creator Brian Woods!
Scalped
Fifteen years ago, Dash Bad Horse ran away from a life of poverty and hopelessness on the Prairie Rose Indian Reservation. Now, he's come back home to find nothing much has changed on "The Rez" in this gritty, gripping organized-crime drama.
100 Bullets
If a stranger offered you a chance to get away with murder...would you take it? In this dark, multiple award-winning crime series, ordinary citizens are given the opportunity to exact revenge on a person that has wronged them. Guaranteed full immunity, what would you do?
Ex Machina
When an accident gives Mitchell Hundred amazing powers, he becomes America's first living super-hero. Eventually tiring of risking his life merely to help maintain the status quo, he retires from crime-fighting and runs for Mayor of NYC, winning by a landslide. And that's where his adventure begins...