Fables: The Wolf Among Us Vol. 2

Bigby Wolf has been around for a good long while, and he's investigated pretty much every crime imaginable-but even an immortal Fable like him can still stumble across a once-in-a-lifetime case.

As the sheriff of the magical New York City neighborhood known as Fabletown, Bigby is hot on the trail of the killer who beheaded a princess and then unleashed a horde of gangsters and monsters to cover his tracks. But even as Bigby reels from attempts on his life and watches his trail of suspects go cold, an old evil reappears to wreak havoc once more. Is the urban legend known as Bloody Mary to blame? Or is she just one more tortured pawn in an even bigger game, with an even more crooked opponent waiting to make his move?

The acclaimed adaptation of the hit mystery from Telltale Games-inspired by Bill Willingham's best-selling Vertigo series FABLES-concludes in this second volume of FABLES: THE WOLF AMONG US, written by Matthew Sturges and Dave Justus and featuring a powerful pack of artists, including Travis Moore, Shawn McManus, Eric Nguyen and Steve Sadowski. Collects issues #8-16.
Voir plus Voir moins 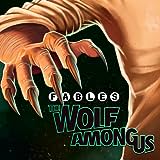 Everafter: From the Pages of Fables (2016-2017)
From the team that brought you FABLES: THE WOLF AMONG US comes a new chapter of the FABLES legacy! In a post-Fables world where magic abounds, it can be wielded for the greater good or used to plant the seeds of anarchy and terrorism. The Shadow Players are a global network of agents-both Fable and mundane-tasked with policing a newly enchanted world and protecting humanity from itself. EVERAFTER
Cinderella: Fables Are Forever
Following up on the smash hit CINDERELLA: FROM FABLETOWN WITH LOVE, everyone's favorite secret-agent and bon vivant Cinderella is back on the job, alongside writer Chris Roberson and artist Shawn McManus!
Cinderella: From Fabletown With Love
Spinning out of FABLES comes a tale starring Fabletown's greatest secret agent! When supernatural artifacts from the Homelands begin surfacing in the modern world, it falls to Cinderella to stop the illegal trafficking. But can Cindy foil the dark plot before Fabletown is exposed to all the world?
Jack of Fables
The "fractured-fairy-tale" series FABLES tracks a secret society formed by myths and legends, living in a hidden enclave in modern-day New York. But what happens when a wayward Fable roams the heartland of America? And how are all the legendary Jacks (Horner, Frost, etc) the same guy?