The breakout character hit of the year is Gwen Stacy: Spider-Woman! In one universe, it wasn't Peter Parker who was bitten by the radioactive spider, but Gwen Stacy! She's smart, charming and can lift a car — just don't tell her father the police chief! And now, in the wake of Spider-Verse, Gwen swings into her own solo adventures! And she soon finds herself between a rock and a hard place when the Vulture attacks, and NYPD Lieutenant Frank Castle sets his sights on bringing her down. Then, still haunted by Peter's death, Gwen visits his only family: Ben and May Parker. But what really happened the day Peter died? Find out right here as the spectacular Spider-Gwen steals not only the spotlight, but also the hearts of comic fans worldwide!
Voir plus Voir moins 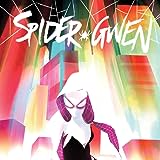 Spider-Gwen (2015)
Spider-Gwen spins into her own series! Gwen Stacy is Spider-Woman, but you knew that already. What you don’t know is which friends and foes are waiting for her in the aftermath of Spider-Verse!

Spider-Gwen (2015-2018)
Gwen Stacy is back on the webs and has all-new, all-different mysteries to solve.
Spider-Man/Spider-Gwen: Sitting In A Tree
Collecting Spider-Man (2016) #12-14, Spider-Gwen (2015B) #16-18. K-I-S-S-I-N-G! That's just one of the things that makes this a very modern Marvel team-up, as the two most sensational web-spinners of the 21st century cross paths — and lock lips! Miles Morales and Gwen Stacy are two young heroes from different Earths, but what threat could unite the Spider-Man and Spider-Woman of the new gener
Edge of Spider-Verse
As Spider-Verse, see how every Spider-Man ever will factor into the gigantic Spider-Man event. Featuring all your favorite Spider-Man including Spider-Man Noir, Gwen Stacy Spider-Man and more!
Spider-Women (2016)
SPIDER-WOMEN PART 1! The Spider-Event of 2016 is here, bringing SPIDER-GWEN, SILK and SPIDER-WOMAN together for a story too big for any one of their books! Spider-Woman is taking a mentor-role with Silk and Spider-Gwen, and the three spider-heroes take a brunch break on Gwen's Earth-65. But when the nefarious spy organization S.I.L.K. and their leader (Earth-65's Cindy Moon) notice the interdimens