Exploding from the blockbuster DC Rebirth event, writer-artist Francis Manapul and a superstar support team bring you the beginning of the saga of the world’s most legendary superheroes in TRINITY VOL. 1: BETTER TOGETHER!

Gotham City’s guardian. Metropolis’ Man of Tomorrow. Themyscira’s warrior princess. They are Batman, Superman and Wonder Woman. Together, they are the greatest heroes the world has ever seen.

And their bond is about to be tested like never before.

As an older, wiser Superman takes the place of the brash young hero they once knew, Batman and Wonder Woman find themselves confronted by a force that tests their very souls. It is called the White Mercy, and it wields a power greater than that of the World’s Greatest Heroes combined.

Thrown together by fate, these three icons must join together to confront their own weaknesses and defeat the evil in their midst. If they fail, the whole world will fall…

This start of a stunning saga features the greatest heroes in the history of comics from author-artist Francis Manapul in TRINITY VOL. 1: BETTER TOGETHER! Collects TRINITY #1-6!
Voir plus Voir moins

Trinity (2016-2018)
Together again for the first time! Batman, Superman and Wonder Woman. The core of the World's Greatest Heroes…but with a new Man of Steel, the bonds these three share will be tested and redefined by super-star writer/artist Francis Manapul. 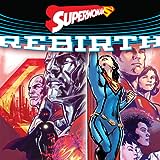 Superwoman (2016-2017)
Lois Lane takes flight! Now powered up with the abilities of Superman, Lois pledges to carry on the super-legacy as Superwoman! There's only one problem: Lois' new powers are killing her, and neither she nor her friend and confidant Lana Lang know what to do about it. Will Lois even survive long enough to learn the deadly secret of Ultra Woman?
Justice League (2016-2018)
Spinning out of the events of DC UNIVERSE: REBIRTH #1, a new day dawns for Earth's greatest heroes as they welcome three new members to the team, including...Superman? Who is this strange visitor from a dead world—and can he be trusted? Batman and Wonder Woman aren't so sure.
Justice League of America (2017-2018)
SPINNING OUT OF THE PAGES OF JUSTICE LEAGUE VS. SUICIDE SQUAD! Writer Steve Orlando and artist Ivan Reis bring together a new Justice League of America with past members and unlikely heroes alike!
Titans (2016-2019)
Friends. Teammates. Titans. Donna Troy, Arsenal, Garth, Lilith and Nightwing were all that and more until a mysterious force erased their memories, forcing them to forget what they could accomplish together. Reunited with their memories returned, the Titans must destroy the interdimensional demon that broke them apart and threatens reality itself. THEY SAID IT: "Grayson and Donna were a couple