Urban Savage is a comedic look at a group of idlers and armchair rebels scraping and scamming on the margins of a chaotic, pitiless City so large it no longer needs a name. Featuring a setting in which Neanderthals and dinosaurs have survived to live alongside robots and extraterrestrial presidents, our protagonist, known only as "the Savage," ekes out a living from his trailer home parked between two office buildings in defiance of the laws of man. A radical pessimist, devout pagan, and hardline member of the perennially unemployed, his is a confused life spent in revolution against something, or someone, though he can never be sure whom.

The Savage's only advantage in this hardscrabble metropolis is a portal, its origins mysterious even to him, which grants him access by some bend in the universe to...a junkyard filled with discarded appliances, tools, knickknacks and, on exceptionally rare occasions, guns, knives and bombs. He spends his days pushing these wares on pawnshops and defending himself against marauding street gangs, weaponized robots, maniacs, extremists, plutocrats, theocrats, autocrats, politically savvy space aliens, and out-of-shape part-time ninjas with whatever his intergalactic gateway offers him in his time of need.

The world of Urban Savage is as vast as it is unpredictable, with unlimited potential for stories for our "hero." Admittedly, most of his time is spent imbibing his preferred whiskies and finding a religious justification for sacrificing the stray cat that refuses to leave his trailer, but the Savage survives on nobody's efforts but his own, and some help from his friends.
Voir plus Voir moins 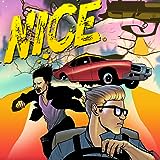 Nice
A hipster noir saga of blood and upright manhattans, NICE tells the story of Kevin and Jose, bored twentysomethings running errands for a massive crime organization and going to the bar afterward. The hard-edged Detective Hanin is on their trail after being the target of a hit, and she’s determined to uncover the truth.