Chapter One of the Steampunk Adventures of Victor Victrola begins a two part eulogy to a pre-apocalyptic Old World. A realm which the main character, Victor Victrola narrowly escapes.

Sailing away in his handmade airship into parts unknown Victor Victrola tells of autocrats, demigods, prophets and climates which lead to the ultimate demise of the civilization.

Facing the deep conscious awareness of the death of everything and everyone he's every known while holding onto his hope and optimism.
Voir plus Voir moins 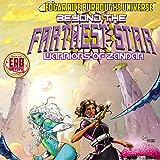 Beyond the Farthest Star
Prepare to be transported across the galaxy to a world of incredible sci-fi adventure that lies Beyond the Farthest Star! In this canonical continuation of Edgar Rice Burroughs' classic novel, new ERB heroine Victory Harben finds herself stranded on the strange and savage world of Zandar, and thrust into a dispute between two bizarre, alien tribes. Born at the Earth's core in the world of Pellucid