Standing out amongst his contemporaries, Kevin Huizenga is the leading cartoonist of his generation; his subtle mastery of the medium has earned him countless accolades and awards. Huizenga's comics are at once straightforward and experimental, serious and funny. His character is the suburban everyman Glenn Glanges, a modern-day Dagwood Bumstead who tackles and stumbles with such heady topics as mysticism and science. 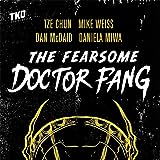 The Fearsome Dr. Fang
NOTHING TO FEAR... BUT FANG HIMSELF! In this globe-trotting adventure, a San Francisco cop and a treasure hunter pursue a Chinese criminal mastermind who is not what he appears to be.