The best-selling horror anthology returns! After the big success of Zombie Tales #1 and Zombie Tales: Oblivion #1, the team is back again with more self-contained stories! 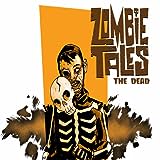